“I am pleased to announce that Village Improvement Association Hall has been listed in the National Register of Historic Places,” said Secretary of State Cord Byrd. “This octagonal style building is very rare in Florida, and for more than a century, it has served as a gathering place for the community, today serving as a museum.”

Today, Oak Hill is a city of about 2,000 residents located south of New Smyrna Beach in Volusia County. Situated on the mainland bordering the Indian River Lagoon, it developed slowly following construction of Henry Flagler’s East Coast Railroad through the area in the early 1890s. The Village Improvement Association (VIA) Hall was built as the Town Hall for Oak Hill in 1906. VIA Hall is the oldest and only public building for community use in Oak Hill. It is a one-story wood frame octagonal building, with a rectangular wing at the back. In 1915, community members moved the building two-tenths of a mile southeast to its current location on East Halifax Avenue, just east of U.S. Highway 1. The move established the building as the center of town and over time Oak Hill’s commercial district developed around VIA Hall. 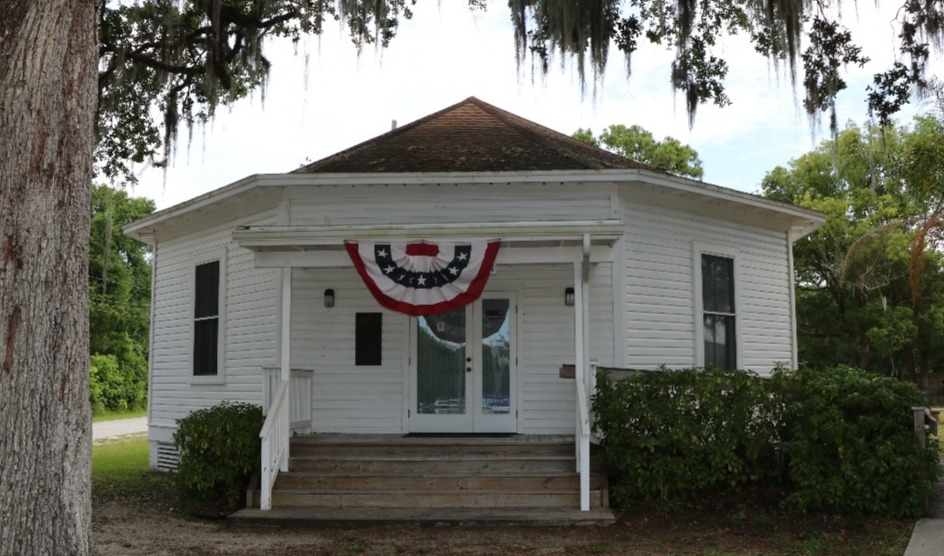 Main entrance to VIA Hall, May 26, 2022. Photograph by Andrew Waber, Division of Historical Resources

Both of Oak Hill’s City Charters, created in 1927 and 1962, respectively, were written in the VIA Hall. From the 1920s until 1986, it served as an election polling place. The building served its original purpose until the construction of the current Oak Hill City Hall in 1965. VIA Hall is an excellent example of an octagon building, which were popular during the mid- to late-nineteenth century but uncommon in the southeast. Most octagon buildings are two to three stories, making this one-story octagon building a rare example of the style. VIA Hall retains key defining characteristics including its eight symmetrical sides, windows on each elevation, a front porch, and exposed eaves.

In 2009, the City of Oak Hill received an Environmental Cultural Historical Outdoor (ECHO) Grant to restore the building. Grant-funded work included structural stabilization, restoring interior materials, adding ADA compliant bathrooms, and constructing ADA ramps. The interior of the VIA Hall is intact, including original wood floors, repaired during the restoration project. These updates allow VIA Hall to continue serving the needs of Oak Hill residents. While it no longer serves as Oak Hill’s Town Hall, the building celebrates the community’s history with a museum, and continues to host a variety of events throughout the year.