The Seminole Wars were one of the most important series of conflicts in American military history. Lasting from 1818 to 1858, they redefined relations between Native Americans and European Americans in Florida.

Materials are generally available through interlibrary loan from the circulating collection of the State Library.

Links within the bibliographies take you to information in our State Library catalog or to more information on external sites.

The State Library has an extensive collection of primary sources about the Seminole Wars from the National Archives. While the originals are in Washington, D.C., researchers can consult our microfilm copies.

Below are selected examples: In addition to National Archives materials, the State Library has a wide range of other primary sources. These materials include militia muster rolls, historical newspapers and more.

Below are selected examples: 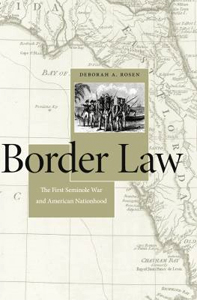 For FY2022-23, the percentage of total costs for the State Library and Statewide Resource Sharing program financed with federal money is 66%; the federal dollar amount to be spent on the program is $1,465,913. Local match, which includes non-governmental funding, is $742,070.31.