Cooking with 17th century Florida Native communities like the Apalachee meant knowing when, where, and how to obtain the many different varieties of food that the diverse Florida landscapes provide.  For example: When and where to harvest different fish and shellfish; how to obtain edible plants from the Florida forests and wetlands; when and how to prepare and plant fields of corn, beans, squash, and sunflowers to get the most out of Florida’s relatively long growing season; where in the environment animals like deer, rabbit, raccoon, turkey, and opossum like to live to make hunting trips easier.

Apalachee dishes often involved mixing or combining staples like various types of corn, beans, and squash with meat and flavorful ingredients found from Florida forests and marshes: fruits and berries, nuts, and wild herbs.  Stews were popular, as were cooked/roasted meat and fish.  They sometimes combined sweet and savory foods! 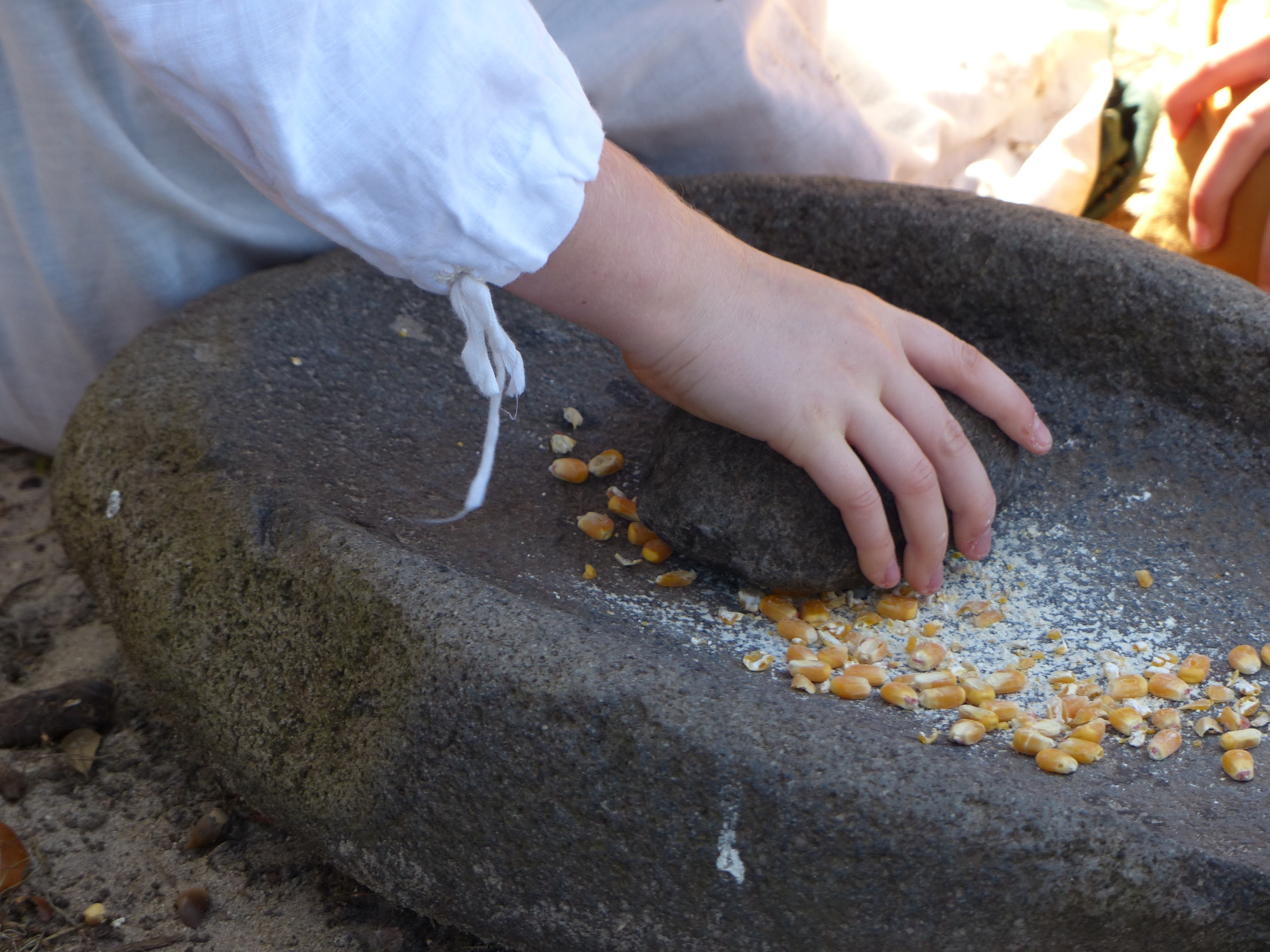 “Corn was consumed in a number of ways: as a lye-hominy porridge made with ashes, in little cakes made of cornmeal, in a thin gruel, onsla, or a thick gruel, atole, and, on journeys, as toasted or parched corn flour. Like the Apalachicola, the Apalachee probably had several varieties of corn, each used for a different purpose.” [Dr. John Hann; Apalachee: the Land Between the Rivers]

Some types of corn appear to have been more desirable and valuable than others, and all parts of the corn (from the corn husks to the corn cobs) were used in some way to benefit the community.  To many Native American societies – including many in the Southeast - corn was (and still is) important not just for food: it is linked to the larger ideas of rebirth and renewal in society.

During a visit to the Apalachee province in 1700, a Spanish official marveled at another particular dish made by the Native peoples from a special, unidentified marsh root:

“…the root of the Ache, which is similar to the Yucca, well processed, yields a flour whiter than that from wheat; and, by pounding it in a hand mortar, throwing water on it, the pungency and poison is removed, and it is possible to make everything from the dough that can be made from wheat, without one being able to distinguish them either in the whiteness or in the flavor. And it is a very good bread and much more desirable than that which is made from maize, but if it is not processed well, the dough comes out very black, and, if the pungency is not removed, the mouth is set afire…; and the removal of this root or tuber requires a lot of work because it grows in mudholes (varieties) full of water, and the entire tuber has so many roots, like a horse's mane or like hair, that in order to pull it out of the ground some very strong levers are needed... Likewise, the Indians make bread from the bitter acorn.” (Leturiondo [1700], from Apalachee: the Land Between the Rivers by Dr. John Hann)

While this description of making flour from the Ache root highlights the foodways ingenuity and diversity of Florida Native peoples, this record also shows a Spanish cultural desire/preference for familiar foods, such as breads made from European wheat rather than Florida corn.  Everyone has food preferences, especially for foods that are familiar.  That was a major reason that the Spanish first brought foods like wheat, peaches, chickens, and cattle to Florida.  However, the Spanish found a liking for some Florida foods - like Native cacina tea and turkey - while the Apalachee grew very fond of chickens and peaches.