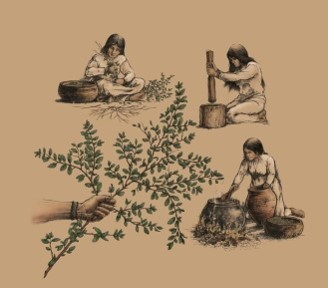 Many indigenous people throughout the Southeast have a long history of brewing a tea made from dried yaupon holly leaves (Ilex vomitoria). Consumed in various cultural and diplomatic contexts, yaupon is the only plant native to the southeast that contains caffeine.

The Apalachee, Creek, Seminole, and Muskogee, the peoples whose ancestral homelands included north Florida, referred to the beverage as the "white drink" because of its association with cultural practices related to peace and purity. Spanish colonists in the 16th century began calling this drink  té del indio or more commonly, cacina or cassina (a word borrowed from the Timucua Indian Language). Later, English colonists began calling this drink the “black drink” because of the color of the tea that was produced when the leaves were brewed. For the Apalachee, an important time that this drink was consumed was in preparation for their ball came ceremonies. The drink was thought to facilitate purification and cleansing to fortify the drinker for upcoming trials, like battles, hunting trips, or a competitive ball game.

Yaupon holly (Ilex vomitoria) can be identified by its small, serrated leaves and bright red berries. Cultivated varieties can grow upright into a small tree, or form dense thickets in shrub-form. Photo by Amber Soderholm, from The Grove's collection