The Museum of Florida History offers a recreation of an early 20th century farm kitchen similar to what might have been found in homes in rural communities throughout the state.

Farming was Florida’s backbone—vegetables, citrus, and sugarcane—although its farmers were often hard-pressed due to economic and natural disasters that plagued the state.

The following is Allegra O’Brien’s description of the improvements she made to her kitchen using the advice of home demonstration agents. About two years ago Miss Cobb, our county Home Demonstration agent, interested me in the Home Demonstration club for women. I joined and have enjoyed learning to can and do other useful things. Last December Miss Cobb invited our club to hear Miss Virginia P. Moore, Assistant Home Demonstration Agent, talk and demonstrate on making our homes beautiful at small cost. Miss Moore didn’t just talk about it and leave us, she showed us how to make a number of things, some of which I have found useful in my improvement work. She scored our homes also. I told her about a sink I had stored away for six years. She said it was time we did something about that. Well, I decided to do what I could in my kitchen.

When we built our home eight years ago, we could afford just four walls with a roof and a floor, so we built a long room. Later, we partitioned the long room into two rooms. Still later we decided to add a porch on the back. I wanted a kitchen so much I asked my husband to box in the west end of the back porch for my kitchen. I insisted on plenty of windows, so we just had a room with shelves built in and the windows only served to let in light and show up the bare walls and bleakness of my kitchen.

The naked two-by-fours overhead not sealed or painted were a regular eye sore, I actually hated to stay in it long enough to wash dishes and cook. I left the dishes dirty as long as I could [to] stay out of the kitchen.  It was just a kitchen to cook in and get away from as quickly as possible. When I started my improvement work in my kitchen I did not have any ready money to start with as we are farmers and are always broke or badly bent. So I asked Miss Cobb if I could put canned specials in the fair beside our club exhibit. She told me I could put on all the specials I could can. So I got busy and entered six different specials at our fair last winter and won $16.65. That money was for my kitchen, so I went at that sink first. 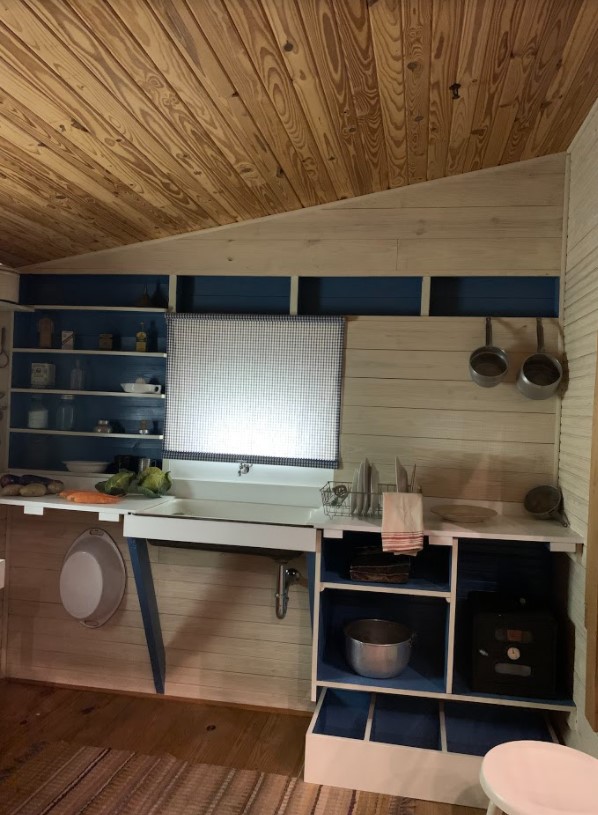 The carpenter put the sink under the window with cypress drain boards built in from sink to wall on each side. The two drain boards give me lots of room to work on. The left hand board is clear underneath and I hang my dish drainer on the wall, under the drain board. I left space wide enough for my one burner oven and made smaller spaced shelves next to it for my twelve quart sized steam pressure cooker. On the floor under these shelves was left a space of fifteen inches high and three feet long so I had my husband make a vegetable bin. He made it out of some old lumber we had. I designed it to fit the space we had. We put in two partitions and screwed casters on the bottom of the bin so it slides out easily. I painted the inside of the bin Holland blue and outside edges a pearl gray. I chose blue and gray for my kitchen because it was so sunny with the south exposure. I thought these colors would make it look cool and I wasn’t disappointed. Next I looked for a high stool and found one on sale at a small fruit stand for $1.25.

My kitchen table is a double decker. It was fine except the top was rough and full of holes. I bought enamel and oil cloth for it and even covered it with tin once, but I tore my clothes on the corners and when my neighbors tore their dresses, too, I decided I had better do some improvements on that table top. I bought another board and my husband tore the old one off and put a new cypress top on and there is no crack either.

The shelves I had built over the left hand drain board I painted the same color as the rest, blue inside with gray edges. I have cook books on the top shelf, flavoring and spices on the next and coffee, tea, cocoa, baking soda and powder on the next, rice, oatmeal, sugar, and such in glass jars on the others.

For the single window over the sink I used a width of some blue and white checked gingham with a wide hem at bottom and rick-rack stitched on for the slat, and put it on a regular window shade roller, so I can roll it up when I work at the sink. I thought curtains at this window would always get splashed. I had an old low backed chair. I painted the bottom of the legs, the edge of the seat, and the bow blue; and the rest gray and it now matches the other things in my kitchen. I put it in the other end of my kitchen.

In the corner, I had a cupboard built. I put curtains over the four upper shelves and keep my churn and milk pitchers and rolling pins there out of the dust. I had six wide shelves, spaced seven inches apart built below. Each shelf will hold six pint cans. I now have the shelves full of tomatoes [and] string beans canned from our garden in tins cans.

Next to these shelves is the door leading into the back porch. It always swung in and hid my shelves. Also the bottom of the door always stuck and scraped the floor so badly I could never paint it or put linoleum on it. I asked my husband to change it, but he never had to pull the door out of his way to get things off the shelf and couldn’t see why it wasn’t alright. I got desperate and took a pair of pinchers and yanked that door off the jam and stood it out in the back porch before breakfast. Billie, my husband, came in and laughed and said I would have my way, wouldn’t I? And he hung that door to swing out, in a very few minutes.

From this door to the next corner just seemed made for my stove. It fits exactly with no wasted space and I had three shelves built over the stove for pans and lids, etc. The bottom one is just the thing for my pie and cake tins. On the top shelf in a place of honor is the lid to my steam pressure cooker. My cooker is the most important item in my kitchen.

We fixed an ironing board like the one described in Farmer’s Bulletin No. 927, built on the wall next to the door leading into the dining room. I had my old board shaped as near like the one described as we could and it cost me nothing, only the time it took my husband to put it up. I don’t mind ironing anymore as the board is solid and handy to the stove.  Also it is just right for my height.

The floor is oiled until I can win some prize money on my specials. Then I shall get a blue and gray tile linoleum. I enameled the drain boards and the window sill over the sink, white. I did all the painting myself. Billie laughed at me at first and said it would cost a hundred dollars at least. If I had waited to get the hundred dollars I would still be dreading that old dreary kitchen I used to hate so much. Now I have a cheerful place to work with, everything’s interesting, and it didn’t even cost half a hundred.