The Florida Department of State in partnership with the Electronic Registration Information Center (ERIC) today launched a voter registration campaign that will reach more than 2 million potentially eligible Florida residents to encourage them to register to vote before the deadline on October 5.

“This unprecedented outreach is a testament to the commitment Governor DeSantis and the Florida Legislature have for registering new voters and encouraging participation in our democratic processes,” said Florida Secretary of State Laurel M. Lee. “Voting is the fundamental way we practice civic engagement. This bi-partisan effort is focused on enhancing the voices of all of Florida’s citizens by providing accurate and timely information about voter registration and voting options in Florida.”

Floridians who are potentially eligible but unregistered to vote will receive a postcard in the mail directing them to RegistertoVoteFlorida.gov where they may choose to register online once they have affirmed their eligibility. The mailer will also educate potential voters about their voting options: by mail, at an early voting site, or at the polls on election day. The postcard is in both English and Spanish.

In addition to encouraging higher voter turnout before every federal and general election, the partnership with ERIC will allow the Department and Supervisors of Elections to cross-check voter information with 29 other member states to better identify registered voters who are deceased and duplicate registration records, as well as effectuate other list maintenance activities, allowing Supervisors of Elections to maintain more accurate and up to date voter rolls.

Millions of Floridians will be mailed this postcard from DOS encouraging them to register to vote. 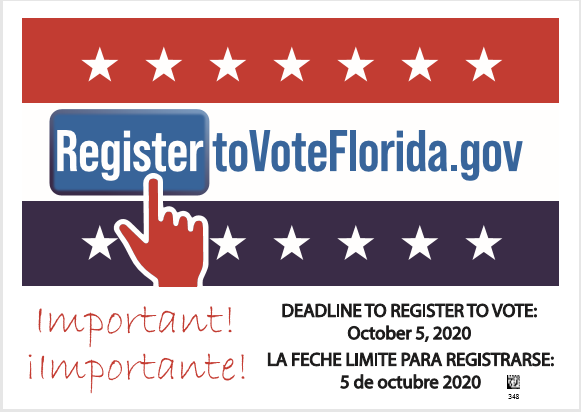 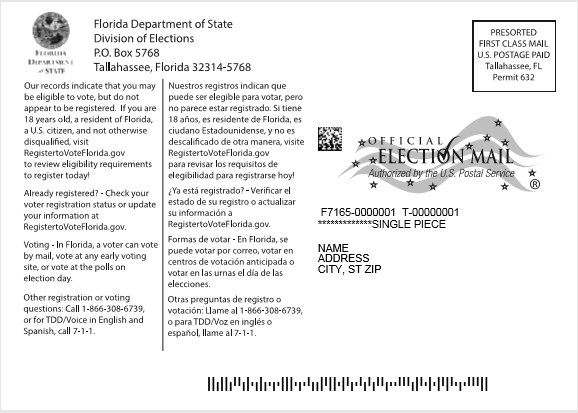 Along with data from the U.S. Postal Service, voter registration systems, and Social Security death records, data from the Florida Department of Highway Safety and Motor Vehicles will play a pivotal role in determining those potential voters who will receive a postcard. This year, it was determined that more than 2 million Floridians will be receiving a postcard.

The 2.2 million Floridians who will be receiving postcards are potentially eligible voters who are 18 years of age and older, Florida residents and U.S. citizens. In order to register, they must swear or affirm to all eligibility requirements.

With Florida’s deadline to register to vote in the 2020 General Election approaching on October 5, postcards are being mailed now to maximize civic engagement. This window to contact Floridians was determined by ERIC as the most effective time to conduct registration outreach.

The mail out will be spread over the next several days and will be sent in a random and equitable distribution.

Florida is committed to protecting the integrity of the voter rolls and preventing election fraud.  As a member of ERIC, Florida is now equipped with more tools to further ensure accurate voter rolls, making voting easier and reducing costs to taxpayers.  In addition to enhancing the accuracy of the voter rolls, the partnership with ERIC will lead to increased voter registration in Florida and more citizens engaged in the electoral process.

About the Florida Division of Elections.  The Florida Department of State’s Division of Elections supports the Secretary of State, Florida’s Chief Election Officer, in ensuring that Florida has fair and accurate elections. The Division’s three bureaus; the Bureau of Election Records, Bureau of Voter Registration Services, and Bureau of Voting Systems Certification, have several responsibilities in the areas of legal compliance and elections administration to ensure that Florida’s election laws are uniformly interpreted and implemented. The Division also assists local Supervisors of Elections in their duties and promotes enhanced public awareness and participation in the electoral process. For more information about Florida’s elections, visit dos.myflorida.com/elections/